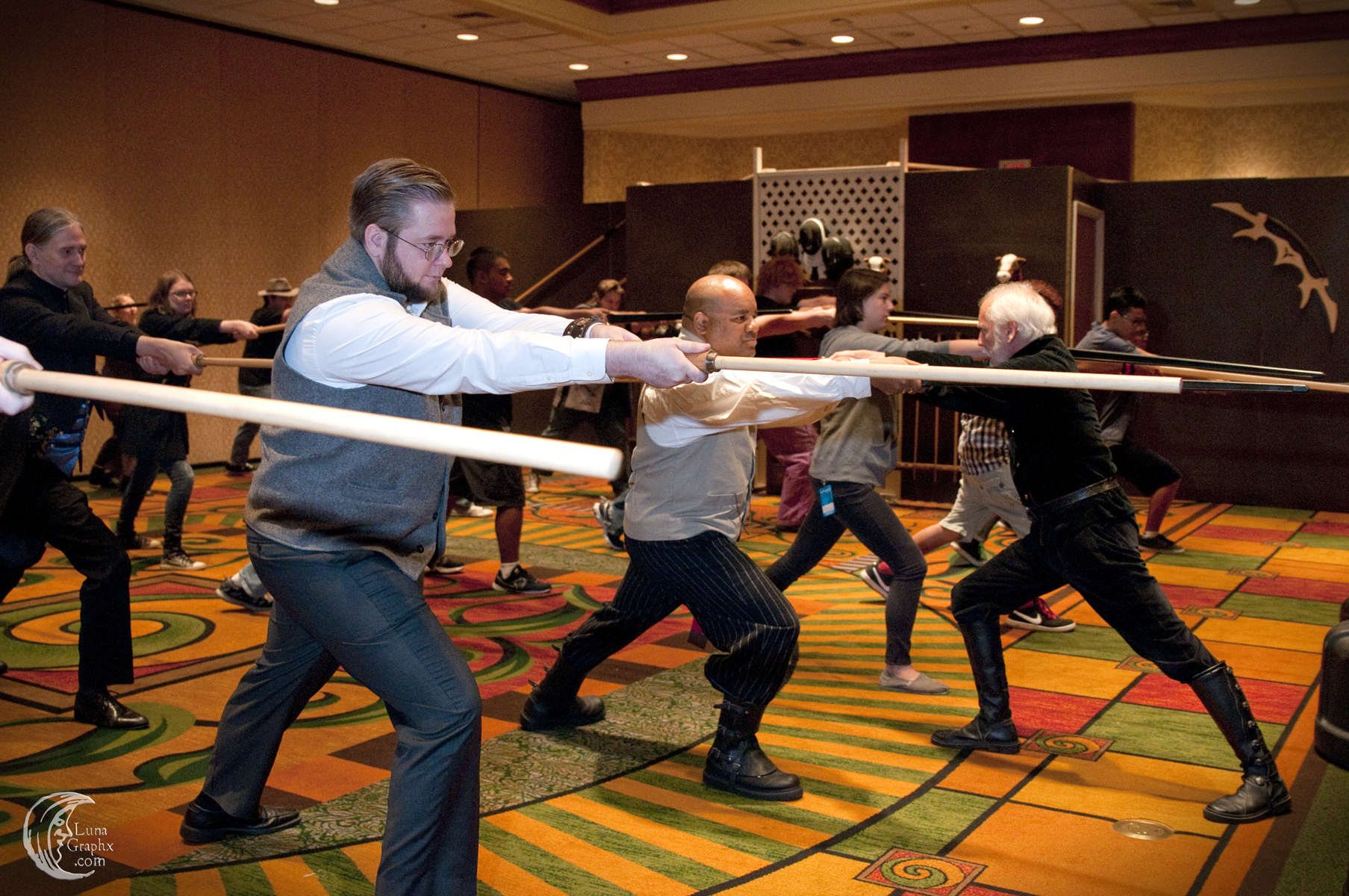 Our crew has traveled on airships, submarines, and a myriad of steam powered conveyances to the four corners of the globe to bring to you instructors from a range of Western and Eastern Martial Arts. Our instructors have an average of 30 years of martial experience and will provide hands-on instruction.

Join us to hone your skills with a wide range of weapons, such as swords, canes, spears, knives, umbrellas, hat pins as well as Luminous Sabers from galaxies far away. From the Victorian and Edwardian eras, experience skills the Suffragettes used to win the vote for women. Learn exercises the British expeditionary forces used to hone their saber skills. Fun for the whole family—a foam dart shooting gallery, And lastly, don’t miss the martial art used by Sherlock Holmes, Bartitsu.

For the beginner and the enthusiast.  Practical application of the saber to include cuts, thrusts and false edge cuts.  Guards and target selection. Scenarios for the students to DEFEND YOUR AIRSHIP!!!

Introduction to the Steampunk Broadsword League

This is a place for you to try your skill in a fun and playful zone. Choose your weapons, foam against foam in a controlled environment. Bouts are to five points, one touch is one point, cut or thrust to the waist or above, nothing aimed at the back of the head. Masks and gloves provided by EnGarde Foamworks.

A handshake may be your deadliest opportunity when you know the scientific art of Small Circle Jujitsu! When one seeks to manage ruffians with elegance and efficiency through joint locks instead of crude bludgeoning, messy knives, or nasty death rays. Learn the fundamentals of submission joint locks and how to safely practice with a partner.

Intro to Lightsaber Choreography with the Saber Guild

Pick up a lightsaber and bring out your inner Jedi or Sith! Learn the basics of our choreography system and an introductory fight scene!  Visit saberguild.org or facebook.com/PorgTemple/ for more information.

The Vidalia Sandbar fight made Jim Bowie famous, but what about the knife he used?  We’ll go over the basic of what is a bowie knife and how one would fight with one.

Defense Against the Night

Come learn the finer details of Lycanthropy and Vampirism and how to ward off the beasts – or at least hold them at bay! Do you know the difference between a Vampiric Thrall and a Vampiric Lord? Do you know the effectiveness of Garlic? Do you know if a werewolf can change in times other than the full moon? Learn what weapons really work, what to avoid and how to prepare against the creatures of the night.

Join us for the first Northern California Saber Legion Tournament of 2020. All are invited to come and watch, however participation is for active TSL members. Anyone that has attended any of the War Room classes on LED Saber Flourishes and Choreography will enjoy seeing these skills taken to full contact combat levels. Saber Legion armor requirements will be in effect. Rules and video from previous tournaments can be found on the Saber Legion Facebook and Youtube pages.

The Naginata, a long-handled weapon used by samurai, dates back to the 9th Century. Focusing on balance and leverage rather than brute force. The sweeping movements of the Naginata develop physical balance and poise.

Greeting and well met, all you steampunks!

That ancient, noble and historic sport, Croquet has for many years been ever so slightly tedious and slightly boring – but thanks to the Nonsuch Guild, and a meeting held somewhere deep in Surrey, in Great Britain, Mssrs. Conrad Quast and Sir Angus Poisselampe made a pact that Battle Croquet would prove to be the phoenix that rises from the ashes of Association Croquet.  From the  website: http://bumpandthumper.wixsite.com/battle-croquet

However, we will be using the US version of the rules as we did last year.

The Royal Airship Kamahamaha greatly thanks, Battle Mistress Brigit Kent, for teaching all of us this zany new variation.

Introduction to Modern Arnis (knife and stick) and Wing Chun (kung fu), two close quarter fighting systems well suited for the narrow alleys of old cities and the tight gangways and corridors of battling airships. Participants will learn fundamental fighting techniques of the two systems, and a fighting sequence that they can take home to practice.

Lightsaber Choreography with the Saber Guild

Pick up a lightsaber and bring out your inner Jedi or Sith! Learn the basics of our choreography system and an introductory fight scene!  Visit saberguild.org or facebook.com/PorgTemple/ for more information.

The Feminine Arte of Defense

From the Gentry to the Suffragettes, women of the 19th century had to be prepared for anything. Learn how to defend yourselves using everything from parasols to teacups and boots to hatpins. These proven techniques are practical in any time period, from the past to alternate timelines.

A fan favorite for many years at Gaslight Gathering, CombatCon and  Clockwork Alchemy every year! Learn what every airship crew member needs to know when defending against an aerial attack and repealing a boarding action. We will study close combat use of Singlestick, 19th Century Saber, Steampunk longsword, Cutlass, war clubs, and boarding axes on land, sea and air in our Steampunk universe.

Join Instructor Henry Hill as he reveals insights into the mysterious ways of the ancient Egyptian Khopesh. Start with basic blocks and attacks and learn the fighting style that caught the world’s eye and keeps them coming back for more.

For the benefit of all gentlefolk traveling under adverse circumstances, a short course of instruction will be held in dueling and military Sabre. Useful in solving personal duels of honor and dissuading the advances of those unfortunates whom have become zombified. Equipment will be provided. The prudent adventurer is advised to come adorned with attire appropriate for active participation.

La Defense dans la Rue is a term applied to various systems of personal combat developed in France around the end of the 19th and the beginning of the 20th centuries, and is part of the same developing interest in urban street defense that spawned the similar art of Bartitsu in England. Developed to defend against the dreaded Parisian Apache street gangs.

Rapier and Dagger Dueling in The Steam ‘Verse

Adventurers, explorers, rogues, and gentle people, join your fellow steampunks in the War Room for a massively multiplayer game of RPG swordsmanship. Start off with a lesson in foam sword combat, then battle with other steampunks in a huge foam sword battle area with bases, bridges, and simulated airship raids.

Even Steampunks need to exercise.  Experience the exercises that British Expeditionary forces used to expand the Victorian Empire.  Indian clubs were exceptionally popular during the health craze of the late Victorian era, used by military cadets and well-heeled ladies alike, and even appeared as a gymnastic event in the 1904 and 1932 Olympics.

Most War Room attendees are familiar with the ways of fighting with a cane, something that was not meant as a weapon. Here we teach an African style of cane and spear work.

For those of us who choose to sit while dueling . . . using fencing gear approved by Clockwork Alchemy. Weapons provided by Tom Badillo, safety gear provided by EnGarde Fencing.

More information about the history of wheelchair fencing can be found via this link: https://www.paralympic.org/news/sport-week-history-wheelchair-fencing

Mensur German Dueling is really neither a duel or a sport – it is a style of fencing promoting character without winners or losers. Participants face off one pace away from each other and try to smite the other with a sword without moving their feet. Flinching and dodging are not allowed as a matter of honor. Historically, scars from Mensur German Dueling were seen as a badge of honor.

There are several cane fighting traditions: from the French La Canne to the use of Prof. Vigny’s cane in Bartitsu. The use of the cane is widespread for self defense.  Instead of a specific style we will look at what we hope are some of the simplest and most effective methods of self defense with a cane.

A workshop for adventurers, writers, choreographers and martial artists: What do you do if you find that you brought a knife to a sword fight? Or a sword to a spear fight? Here you will learn strategies for unmatched weapons. Your best strategy will depend on your reach, strength and speed.

The pole arm — a perfect weapon for defending your airship. In this class, Coach Paul Tosetti will be teaching Italian Pole Arm techniques originally taught by the masters of the 1500’s. Let the lessons of the past protect you in the future.

Zombification seems very simple until you have someone gnawing on the back of your neck. Come learn about the medical classifications, the facts and falsehoods, the practical uses of zombification, how to repel these monsters, and maybe even get started on your apocalyptic survival kit.