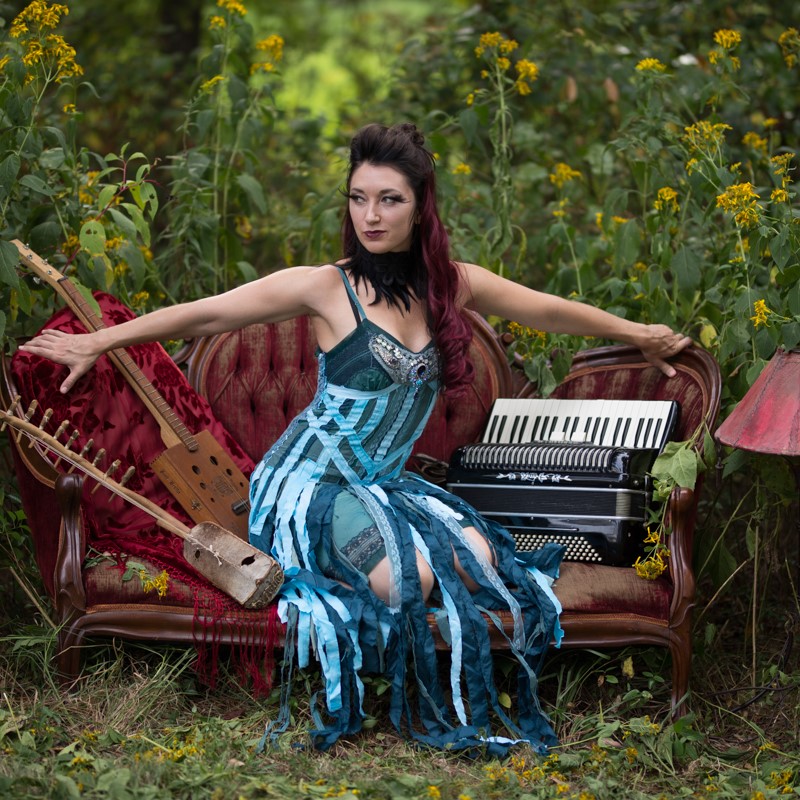 If you’re not getting enough accordion and saw in your music, have we got a a treat for you! Returning to Clockwork Alchemy 2020 is Crystal Bright and the Silver Hands!

Award winning singer/songwriter, ethnomusicologist, composer, multi-instrumentalist, Crystal Bright, has played over 1000 shows from Canada to San Diego, Florida to Seattle since 2010. Bright performed with the North Carolina Symphony in 2011 on an arrangement of her song “Toy Hammer,” and has performed at various festivals around the country (SXSW, Savannah Stopover, FloydFest, DragonCon, Midpoint Music Fest, The Steampunk World’s Fair, Shakori Hills, and many others.) She took Runner Up for On the Rise at Floydfest 2013 for a return set in 2014, and was named Best Singer in 2012, Best Songwriter in 2014, and Best Musician in the Triad in 2015 by Greensboro’s Yes Weekly.

Her albums (a visual collaboration with DividingMe Photography, “The Absolute Elsewhere” (Jan. 2015) as well as “Muses and Bones” (2012)) received press and glowing reviews in the US & Europe, as well as radio airplay in the US, UK, & Canada, including NPR and BBC appearances.

“Leonard Cohen and Tom Waits start auditioning circus performers to develop a cabaret act from Mars with Goth overtones and Leon Sash sensibilities–a mash up it seems only they could come up with. Bright seems to have found the sweet spot without any help from those cats. Wonderfully left field in a first class way, this is certainly just what the doctor ordered if you think that now is the time for something completely different.”

“The music of Crystal Bright and the Silver Hands is not easily pigeon-holed. From gypsy jazz, to klezmer rave-ups, to Danny Elfman-esque gothic soundscapes, the music forges a dark yet whimsical path.”

“Jane Siberry and Danny Elfman record a Gypsy Folk soundtrack to a Slavic noir detective movie starring Tom Waits as the gumshoe and Kate Bush as the dame.”

“The music of Crystal Bright and the Silver Hands is the sort that can only begun to be described by listing other styles of music. First, start with old-timey. I could name-drop Gogol Bordello, Jason Webley, The Crow Quill Night Owls, and other carnivalistic freight-train drifters and associated rattletrap ruckus. There’s certainly a horizontal stripe of Burton/Elfman-via-Django Reinhardt-bonkers in there. The band calls their sound “Kaleidophrenic Cabaret,” I call it “a colony of bats drunk on apricot moonshine set loose upon the Stringband Jamboree.”